Since its founding in 2005, ONIX has dedicated its mission to growing the sport of pickleball with leading products and innovation. As the creator of the Z5, pickleball’s top-selling paddle, ONIX brings cutting-edge technology with a personality to match – products that make a statement in both performance and style. Our pickleball paddles, balls, and equipment are designed by players for players. Through ongoing research and development, ONIX is continually raising the bar as the best in pickleball. ONIX – because winning is fun!

At Onix, we are pickleball fanatics, just like you. We love the game and are committed to growing the sport of pickleball with top-of-the line products - a job that we take very seriously. Founded in 2005, our mission has always been to deliver top-quality equipment with advanced technologies and features that raise the bar for everyone on the court. Our paddles are designed by players, for players. Through on-going research and development, our engineers are continually developing new products that lead the way for the entire pickleball community. Our goal is to produce the best pickleball paddles, balls, and equipment that will take your game - and the entire sport of pickleball - to the next level. And we are doing just that. Take a look around, and you'll see why Onix is considered the best in pickleball.

To ensure our products are at the forefront of professional pickleball play, we partner with elite players at the top-level of the sport that depend on Onix to give them an advantage on the court. And just as our pro players trust Onix to provide top-quality products, we look to our players for expertise in developing innovative pickleball equipment with professional-level refinement. Our phenomenal players play in national tournaments across the country, representing Team Onix and the excellence that we strive for every day.

SCROLL DOWN TO READ ABOUT MORE ONIX PLAYERS 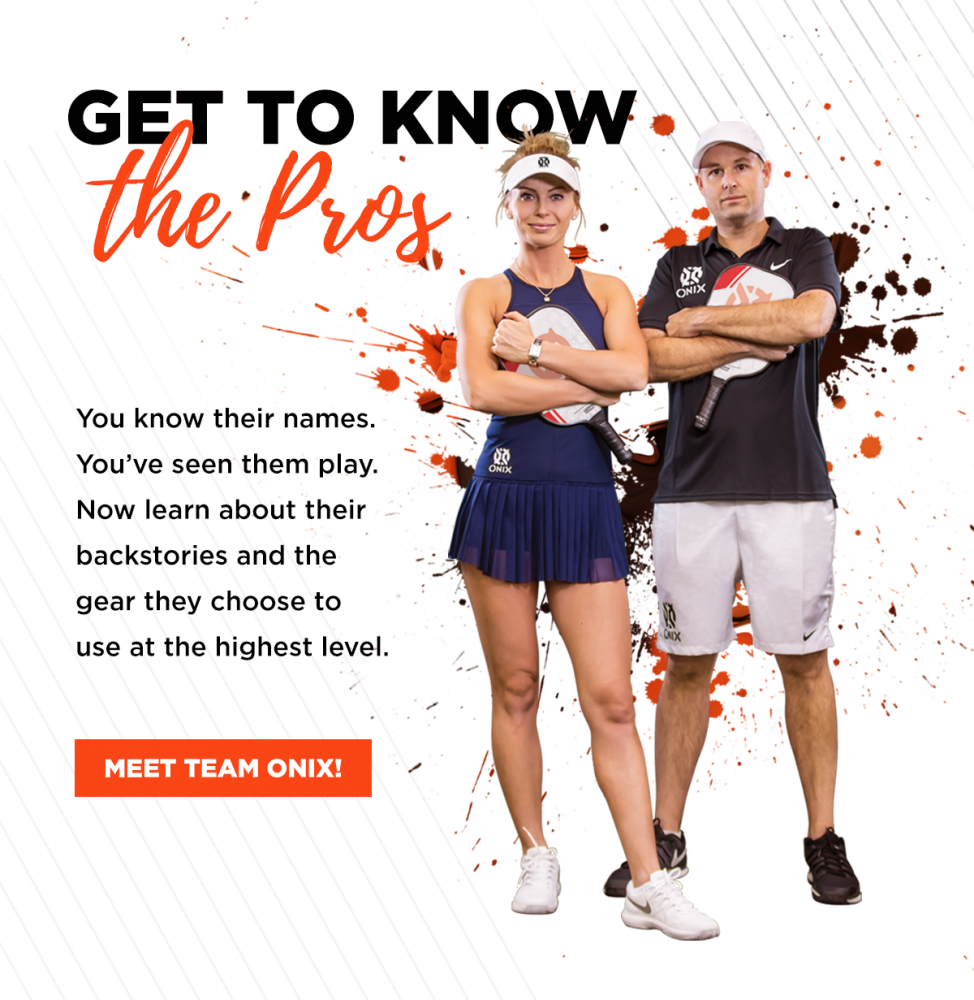 Kris Anderson grew up playing tennis and platform tennis in New York and played four years of tennis at Lehigh University. One day when it was raining, someone suggested to her tennis group go inside the gym and try pickleball. She loved it immediately and was hooked. Kris plays with the ONIX Summit C1 and has won three consecutive National Championships in Mixed Doubles. A resident of Newport Beach, California, Kris is a proud ONIX member because of how supportive the team is with each other.

A native of Slovakia where she was a member of the Junior National tennis team, Lucy Kovalova came to the United States to play collegiate tennis for Wichita State. She played #1 doubles for the Shockers for four years. Three years ago, she made the switch to pickleball and immediately became a top player in the sport. In November 2018, Kovalova won the Women’s Triple Crown at the USA Pickleball National Championships in Indian Wells, CA, winning gold in Women’s Singles, Doubles, and Mixed Doubles.

Formerly a University of Michigan tennis star, Matt Wright was turned on to pickleball by a member of a local country club after he was spotted playing a makeshift mini-tennis game. He began playing pickleball in 2016 and was immediately hooked. Later that year, Matt joined up with Lucy Kovalova for mixed doubles in their first tournament and won the 19+ age division at the 2016 US Open. That event gave them the confidence that they could compete at the highest level. Since then, he has accomplished the rare feat of winning gold in the open division at the three major Pro Pickleball tournaments of 2018. In addition to representing Team ONIX, Matt also works as a corporate attorney in Wichita, Kansas.

As an experienced tennis player and coach, Wesley Gabrielson had been familiar with pickleball since middle school. After taking three years off from the sport, Wes made his way back to pickleball and has been a dominant figure since. He is an 11-time USAPA Nationals champion, two-time Tournament of Champions winner, and a two-time US Open champion. His paddle of choice is the Onix Voyager Pro because of the blend of power and touch. “My dinks and slices are controlled with this paddle, while I am able to add power and swing freely with the longer handle of the paddle,” he says.

After back surgery, Steve Cole was looking for a low impact sport. His background was in racquetball, table tennis, and basketball, and his wife, who was already playing pickleball, convinced him to try it. Steve instantly fell in love with the sport. Since then, the Las Vegas, Nevada, player has won more than 70 5.0/pro event tournaments. Using his ONIX Evoke Pro paddle, he is proud to represent Team ONIX at tournaments.

Growing up in Ghana, Byron Freso has always been playing sports at the top level – whether volleyball, racquetball, or table tennis. After injuries forced him out of playing competitive racquetball, Byron and his wife, Marsha, discovered Pickleball, and became hooked. Byron has won countless medals as a professional player, and is also heavily involved in the sport in other areas as the Team Ambassador for ONIX Pickleball, an IPTPA and PPR certified Pickleball instructor, and is also considered to be one of the top referees in the game.

KaSandra Gehrke started playing pickleball in the summer of 2016. She was teaching physical education and was searching for a new sport to teach to her classes. She discovered pickleball was the perfect sport for both her students and her to learn! KaSandra recently went full time traveling the world teaching the sport and competing in tournaments. A resident of Springfield, Missouri, she loves playing with the ONIX Evoke Pro pickleball paddle because of its mix of touch and power.

After years of playing competitive tennis in high school, college, and at the pro level, Lisa Naumu decided to take a break from the sport after realizing her heart wasn’t in it anymore. She decided to try pickleball at a public park in Palm Desert, California, where she lives and began to feel that competitive drive come back. Since then, she’s been a dominant force in pickleball. Lisa plays with the Evoke Pro because it provides her with the pop she needs to drive the ball and helps her with her finesse game to dink and for third shots.

A former NAIA All-American tennis player, Bonnie Williams picked up pickleball when rehabbing an ACL injury. Since switching to pickleball, she is a seven-time USAPA Nationals champion, four-time Tournament of Champions winner, and a three-time US Open champion. She loves playing with the Evoke Pro because it offers the perfect balance of control and power all in one paddle.

Eleven years ago, Jim Hackenberg discovered pickleball at his local YMCA and he hasn’t looked back since. Since then he’s gone on to win gold medals at tournaments across the country. His favorite accomplishment was winning National and US Open titles with his wife Yvonne. He plays with the ONIX Outbreak pickleball paddle because of its excellent touch and control. When not traveling for tournaments, Jim splits his time between Kalamazoo, Michigan, and Surprise, Arizona.